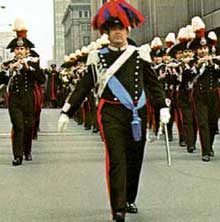 Born in Taranto on 17 February 1933, he began his musical studies at a very young age, graduating in Trumpet with Maestro Reginaldo Caffarelli, in Instrumentation for Banda with Maestro Salvatore Rubino and in Composition with Maestro Dino Milella, Alfredo De Ninno and Armando Renzi.

For three years he held the chair of Band Instrumentation at the State Conservatory “A, Casella” of L’Aquila.

After having directed the Banda dell’Aeronautica Militare since 1968, on March 20, 1972 he was appointed Director of the Musical Band of the Carabinieri, which he directed until December 2000. Under his direction, the Banda dell’Arma dei Carabinieri embarked on triumphal tours touching the major European and world cities.

A prolific and inspired composer, he has written for Banda, Orchestra and Chamber Music and has made transcriptions of some of the greatest classical and contemporary authors.

He was awarded numerous artistic, civil and military awards including the “Diploma of Gold Medal to the Merit of the School, of Culture, and of the Art”, the honor of “Commendatore” conferred by the President of the Italian Republic and the “Silver Cross of Merit of the Army”.