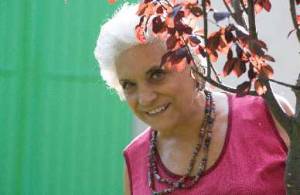 Born in Chiaromonte (Potenza) she graduated in classical literature. She resides in Paris.

She lived eleven years in Iran, working at the Italian Institute of Culture in Tehran, a collaborator of ISMEO (Italian Institute for the Middle and Far East), ANSA correspondent and reader at the University of Tehran.

She lived in Spain, in Barcelona. She has taught Italian language and literature at the University of Rennes in Brittany. A prolific writer of poetry, fiction and non-fiction, she has published in Italy and abroad.

She has won several awards and is present in various anthologies. Her works are translated into various languages and have won prestigious awards. She transcribes and illustrates his poetic texts on silk, with which he made numerous exhibitions from 1982 to 1992.